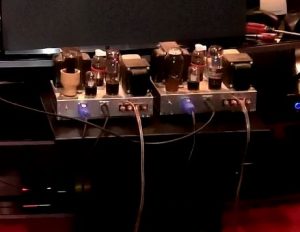 The North Georgia Audio Society’s Fall 2017 meeting was an opportunity to test out some really great equipment. The guys from Audio Electronics Repair worked until midnight to have everything ready for us, and as always the restoration work was top notch.

In addition to component testing, the folks at Pax Innnovation offered speaker re-cone demonstrations, and short talks about how to use Loudspeaker Management Systems, and how to setup and use J River Media Center.

While everyone was familiar with the excellent Eminence APT-200S horns, the change from the Eminence ASD1001 compression driver to the JBL D220ti was immediately noticed. The Eminence ASD1001 is a true bargain at $60 a pair, but for only $40 more the JBL’s bested them by being much flatter in response across their range.

The real purpose of these Valencia’s was two-fold: testing a future build of a smaller cabinet for the Model 19 and understanding the impact of changing the Model 19’s crossover down to 800 Hz in a 3-way system. Both worked perfectly.

For along time we’ve had a love/hate relationship with the classic Altec Lansing Model 19. It sounds good but its cabinet is too wide and low. We also thought the 1.2 kHz crossover frequency failed to take advantage of all the 811-B horn had to offer. There is also something about the 811-B, when used in a 2-way system that takes away from the imaging of the system. We now know that a narrower baffle will work fine, and that lowering the crossover point to 800 Hz and then crossing over into a high frequency horn at 6 kHz greatly improves the sound of the system.

We ran the 811-B’s with a pair of custom mono block tube amplifiers designed by Lawrence Yeatts. Much like his famed tube phono stage, it is a superlative example of tube amplifier design with every detail meticulously thought out and implemented. This amplifier was one of the favorites of the meeting. To put that in perspective, it was facing stiff competition from a recently restored pair of the venerable Mark Levinson ML-2’s. 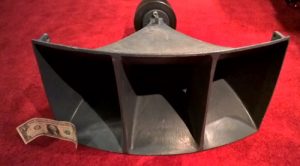 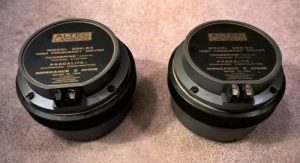 Why use such a large horn and driver? The 311-60 covers the most critical range of human hearing (300 Hz-3 kHz) without needing to crossover.

Everyone liked the 311-60/299-8A combo so much that we asked the folks over at Vintage Speaker Revival to build us a custom pair of enclosures to house them along with a pair of Altec 416-8x woofers and the Eminence high frequency horns that we had tested in the Valenicia’s. So, stay tuned for our next meeting when we will be testing this all new design. 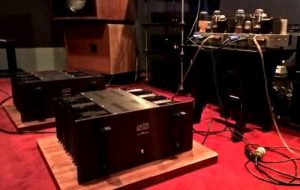 Next up was the pair of newly restored Mark Levinson ML-2 class A mono blocks. Both of these units underwent extensive cosmetic and electronic restoration at db Electronics in Knoxville, TN. The pair was a sight to behold. They looked as if they were new, both inside and out. db Electronics did an awesome job on these classics!

What can be said about these amplifiers that hasn’t already been said a thousand times before? The ML-2 is the perfect class A amplifier in every way. It does what every amplifier should: amplify the signal without adding or taking away from it in any way. Unfortunately, most of these marvelous amps are no longer working as designed due to the degradation of the internal components over time. Having the opportunity to hear and see a pair that are virtually new is a rare treat for any audio engineer or audiophile. 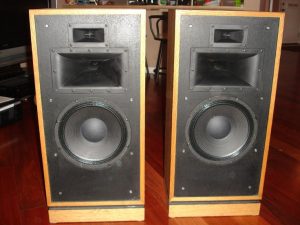 The Klipsch Quartet is basically a Forte II with a smaller 10″ woofer and 12″ passive radiator. We’ve been wanting to test a pair of these for awhile because many audio enthusiasts want a great horn based speaker system but don’t have room for a big Altec or JBL cabinets. After listening to a pair of Forte II a few years ago we thought the Quartet might meet their needs better than a Heresy.

We paired the Quartets with a vintage Klipsch SW-12 II subwoofer to help with the lower frequencies. Our hopes were that this combination would actually outperform the larger Forte II speaker system. This turned out to be the case. The Quartets, when combined with an SW-12 sub are a wonderful horn based loudspeaker system for smaller listening rooms. They are far better than any Heresy, and with the aid of the sub outperformed the Forte II. 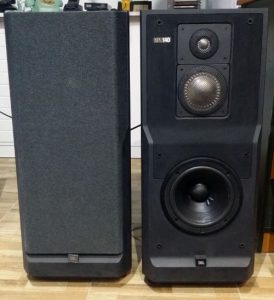 Another speaker system that we wanted to evaluate for smaller spaces was the JBL XPL-140. These are extremely well built speakers. Everything from the enclosure to the drivers is of the highest quality. They are unique in that they do not use the traditional 3.5″ JBL mid-range. In place of it they have a large titanium dome mid-range which is similar in design to JBL’s famous titanium tweeters.

It took a couple of years to find a pair of XPL-140’s, and all of the drivers needed attention. The woofers needed re-foaming, and the mid-ranges and tweeters needed to be disassembled and the foam behind them replaced. In addition to this one of the titanium mid-ranges had a dent in its dome. We doubted it could be repaired, but the guys over at Audio Electronics Repair were able to remove the dent and fully restore to driver to its original operating specs.

The sound of the XPL-140’s is nothing like that of the Klipsch Quartets. They are very controlled with almost 3 dimensional imaging. Like the Quartets they needed the aid of a subwoofer to reach down to the depths of the spectrum.

So which was better: the XPL-140 or the Quartet? There isn’t a clear and definite answer to that question. If you like the bigger and more dynamic sound of a horn system then the Quartet wins, but if you prefer great imaging and detail the XPL-140 is amazing. Perhaps the best way to put this into words is that the Quartet is like a big band from the 1940’s -in your face with a wide sound stage. The XPL-140, on the other hand has the richness in detail of Diana Krall’s crooner jazz.

At the end of the day everyone kicked and back and listened to their favorite music. 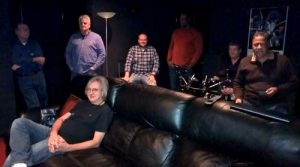