Audiophiles often inquire about proper warm-up times for equipment, and whether or not speakers require a break-in period. These are reasonable questions. Does an amplifier sound better after being powered on for an hour, six hours, a week? Does the sound of new speakers improve after a lengthy break-in period? If you believe many of the things published on the internet and in audiophile magazines, then apparently both or true. In this article we try to get down to the facts.

Before the era of solid state electronics, vacuum tube radios and amplifiers required a certain period of time to warm-up before they were fully operational. It might take fifteen seconds or so before you heard any sound. After about fifteen minutes these units were fully operational. Yet it seemed that things improved slightly more after about an hour of use. There are valid scientific reasons why all of this was true, but is this the case with modern solid state electronics?

Modern amplifiers have a power-up sequence after you hit the power switch. It usually takes them about five seconds before the speaker relays trigger. After which the amplifier is operational, but is it fully operational? There are several types of amplifiers available today, but most audiophiles use either Class B, Class A, or Class A/B. For the purpose of this article we will focus on Class B because Class A has certain drawbacks. These are pointed-out in Bryston Limited’s FAQ.

Some engineers prefer not to have to deal with the possibility of crossover distortion in their designs, and they choose another bias system, called “Class A”, where the output transistors are biased on so much that they continuously conduct more than the full load current, even at idle. Thus, they never turn “on” or “off’, theoretically obviating crossover distortion.  …

A not-so-obvious disadvantage with class A designs is that this high idling current has consequences to the distortion levels far beyond the theoretical elimination of crossover artifacts, (which even in itself is debatable). Transistors have numerous types of distortion mechanisms, among which are deviations from linearity under conditions of simultaneous high voltage and high current. These are, of course, the exact parameters necessary to class A operation, and a typical Class A amplifier runs distortion levels at least 10 times, and often over 100 times, as high as a Class AB amplifier of similar power, or around 0.1%. A careful inspection of the distortion spectrum also reveals that all the harmonics are increased, including those represented by the crossover distortion at which the class A operation was aimed in the first place!. 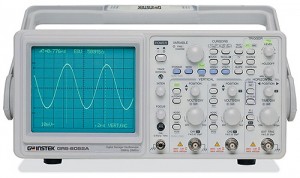 Perhaps the most definitive answer for solid state electronics warm-up times comes from the test equipment industry. In the Tektronix 422 oscilloscope user manual it specifies a 15 minute warm-up period prior to taking any critical measurements. This implies that a sophisticated solid state test instrument is fully functional after 15 minutes. It also implies that even solid state electronics are not 100% fully functional without some period of warm-up. Our testing seemed to prove this. Amplifier output continued to rise from start-up to approximately 15 minutes into operation. Bandwidth, however, remained consistent, and did not improve.

The evidence suggests that solid state electronics do in fact require some initial period of warm-up to reach full operational capabilities. It also, however, indicates that extended warm-up periods beyond 15 minutes provide no additional improvement in performance.

Let’s begin the discussion of loudspeaker break-in periods by identifying the difference between warm-up and break-in. When a system is first powered-up and a signal sent to the loudspeakers, their internal electronics and voice coils go through both electrical and mechanical changes. In particular, the voice coils begin to warm-up. The call by some audiophiles for extended break-in with new loudspeakers requires long periods of playing music at relatively high levels to supposedly help the loudspeaker reach peak performance.

Heat does cause changes in impedance, which suggests that any significant period of silence would allow the voice coils in any transducer to cool. If the change in impedance were significant, it would become audible. There is no observable or objective test to indicate this is true. Thus, speaker warm-up periods produce no audible change in the system.

Extended break-in periods are another matter altogether. To test this we installed a new woofer cone in one monitor, while leaving the other with its original intact. We played back bass drum and then bass guitar recordings in mono. If the new cone were stiffer, the balance between the channels would favor the older cone. In subjective listening tests both woofers seemed to be performing the same, so we took it to another level and measured the output from each woofer using test tones. Again, both woofers had identical output levels. Based on this we concluded that extended break-in periods for loudspeakers produced no actual or perceived improvement.

Why do some audiophiles perceive that break-in periods improve the sound of loudspeakers? Is it a placebo effect? Actually, it more a matter of the interaction between the human ear and brain. Over time we develop a sense of what things sound like in the real world. If our ears hear a sound that isn’t quickly identified, the brain begins to compare it to known sounds. You could view this as a form of auto-correction. The same is true for the human eye. Each eye has a blind spot, but you never perceive this because your brain fills-in the missing optical information based on the light information surrounding this area.

When an audiophile first hears a new pair of speakers, their ear/brain tells them something’s not right because it doesn’t match-up to their auditory memory references. These references are based around their old speaker system, which the ear and brain had come to perceive as normal. After listening to their new speakers for several days the ear and brain begin to re-write these reference point to comply with the new norm. The real break-in period is not for the loudspeakers but the human brain and ear.