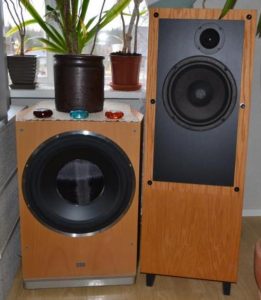 Spectrum Loudspeakers was a speaker manufacturer based in Toledo, Ohio. It was founded by two engineering graduates who, much like Snell, set out to design and build high quality speaker systems using commonly available drivers. The company was well known for its quality control. Each driver was tested before being approved, which resulted in roughly 25% of all the drivers supplied to them being rejected. Their cabinets were also very well constructed. The front baffle on the Model 410 is an excellent example of this.  It’s 1.5″ thick bonded MDF, covered  in hand oiled Walnut or Oak veneer.

We received a pair of the Model 410s that had been recently restored by our friends over at Audio Electronics Repair. The 410s showed up over at Audio Electronics Repair during the time they were doing a complete restoration on a pair of Altec Lansing Model 14s that had been salvaged from an estate sale for our testing system. The somewhat unique design of the 410 made us curious, and we asked the owner if we could borrow them.

It was clear that Spectrum Loudspeakers had given careful thought to the design of this speaker. What could easily have been a bookshelf with limited capabilities was turned into an wonderful floor standing speaker. The attention to detail was everywhere apparent on the 410. The binding posts sit high on the back side, directly behind the crossover and driver to minimize wire length and improve amplifier damping. Instead of the cheap plastic binding posts found on so many speakers, Spectrum went with nickle plated studio grade five-way binding posts. This was at a time when most manufacturers were still using spring loaded clip connectors. By choosing to make the 410 a ported tower they were able to maximize the low frequency response of the system and minimize distortion.  They placed the 410 on two black wedges causing it to be tilted back about 5 degrees. This improved time alignment and made the drivers on-axis with a normal listening position. The 410 was sold in mirror image pairs.

The cabinet is 38.5 x 14.5 x 11.5 inches and weighs about 50 lbs. The 410 utilizes a 10″ low frequency driver along with what appears to be a polymer dome tweeter set into an acoustic lens. Spectrum claimed the system had a frequency response of 28 Hz to 20kHz with a sensitivity of 90db, and a nominal impedance of 6 ohms.

We hooked the 410s up to a Bryston 4BST and DAC. We started off the listening tests with Diana Krall’s cover of Sorry Seems to Be the Hardest Word (Live) from her album Wallflower. The first thing we noticed was the 410s overall timbre and tonal accuracy followed by how its low frequency output matched that of a 12″ studio monitor. When we switched to the much more challenging track Temptation from Girl in the Other Room, we were even more impressed by the low frequency response of the system. After increasing the toe-in slightly, we were treated with excellent imaging. Vocals and instruments were easily separated, and the depth of the stage was at once apparent. Both tracks were conveyed with startling realism, and the dynamics of live recording session.

The design of the 410 set it apart from almost every other speaker we had ever tested. It didn’t require additional raising or tilting to be perfectly matched to the listening position.

We tried to over-power the speaker by pushing the volume upwards on Madonna’s Impressive Instant from her album Music. The aural circling came through with the realism we would expect from a professional system, and perhaps more importantly, the transducers didn’t begin to exhibit distortion until well beyond a comfortable (safe) listening level.

The 410s remained with us for a week where they were tested with a wide variety of music. The only noticeable issue was their tendency to make poorly mastered recordings that favor high frequencies even more distressful. That being said, only a few speaker systems exhibit the level of control required to play back these recordings without fatiguing your ears, and they are far more expensive than the 410s.

If you’re looking for a well made two-way system, and can find a pair of Spectrum Loudspeakers Model 410s (they are rare), grab them. You won’t be disappointed with this system.