JBL has been manufacturing speaker systems for over half a century. Some, like the 4412 monitor, have become professional industry standards. Audiophiles, on the other hand, have had a love-hate relationship with JBL. It’s an unfortunate situation because many of JBL’s speaker systems are far superior to those marketed as “high-end” in consumer magazines. 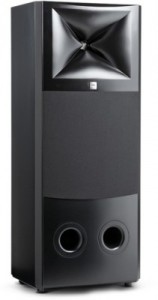 Pretty much anyone in the industry has a pair of 4412’s lying around somewhere, but over the course of time many have switched to ATC or other brands of monitors. JBL didn’t update the 4412 for many years, with the exception of the 4412A which was mostly disliked for its lack of L-pads. It’s replacement, the LSR32/LSR6332, is an excellent monitor that arrived late to the game. It’s a true bargain when compared to ATC’s offerings.

When I first saw the M2 it reminded me of my many disappointments with horns in the studio and my home. I hate them with a passion. Music doesn’t sound so harsh in the real world, and speakers shouldn’t make it sound that way either. My mind was already made-up that the M2 was an awful loudpseaker that no amount of equalization could correct. I was actually looking forward to venting my frustration with JBL in this review.

The M2 is the result of the acoustic research conducted by Drs. Floyd Toole and Sean Olive at JBL labs in Northridge, CA. Unlike passive monitors, the M2 is a complete reproduction system that includes two Crown I-Tech 5000HD amplifiers, BSS OMNIDRIVE HD, and Harman System Architect Software. All of this is included for the $19,999.00 cost of entry.

Frank Filipetti had nothing but good things to say about the M2, and more often than not we found ourselves agreeing with his other choices in monitors, but the M2 just didn’t feel right. The amplifiers were far too light weight, and that horn just looked weird. Nothing about it seemed to register with anyone when compared to other equipment we knew well and loved.

After becoming familiar with the software, and tuning the system to the room, we were ready to begin testing. First on the playlist was Jane Monheit’s Honeysuckle Rose from her Take a Chance on Love CD. The sound was breathtakingly life-like. No harshness at all. The imaging was three-dimensionally perfect. The low end was flat and rock-solid. We walked around the room analyzing the sound we were hearing. Even when we approached within a foot of the front plane of the speakers, the imaging remained intact.

It was then that I noticed one of the engineers texting on his smartphone. “Who are you texting?”, I asked. “I’m not texting. I’m putting my B&W 802 Diamond’s on Audiogon.”

The above conversation may be all that you need to know about the JBL M2. For me, it changed my opinion of horns forever, and created a new world standard in speaker performance.

We continued listening and testing until the wee hours of the morning. The JBL M2’s never failed to impress us, regardless of the source material, or how hard we drove them. As Frank Filipetti said, “This is a revolutionary speaker, not an evolutionary one.”