In the age of multi-channel preamp/processors it’s difficult to get excited about a stereo preamplifier. The last truly exciting preamplifer was Apt Corporation’s Holman Preamp, designed by Tomlinson Holman, the engineer also responsible for the THX standard and many other excellent audio and film technologies. Just when you thought two channel preamplifiers were following the path of the dinosaurs, Emotiva introduces the XSP-1 Gen 2 Differential Reference Preamp. 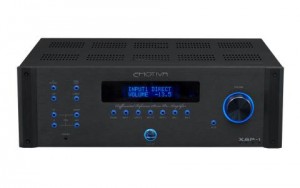 Most articles on Audiophile Nirvana are based on the contributions of multiple engineers and audiophiles, but reviews tend to be subjective in nature because features that excite one person may be irrelevant to the next. A good example of this is the phono stage in the XSP-1. I still listen to vinyl from time to time, but everyone else at Audiophile Nirvana works entirely in the digital domain, so an impressive phono stage was meaningless to them. In light of this, all equipment reviews will be done independently.

When Brian dropped off the Emotiva XSP-1 it was left sitting on the shelf for weeks because no one wanted to pull their preamp/processor to test a stereo preamplifier. At the time I was in the process of completing a full restoration of my trustworthy old Thorens TD-126/SME 3009 Series III turntable, and didn’t have time for it either. As fate would have it, a power supply capacitor died in my Holman preamp, and I needed a quick replacement. I pulled the Emotiva XSP-1 off the shelf and immediately put it into service with Pink Floyd’s Time from their album Dark Side of the Moon. It was then that I noticed the balance was off to the left. Apparently, the XSP-1 was defective. Bummer!

The SME 3009 Series III is one of the most complicated tonearms ever built. It has adjustments for virtually everything, and failure to follow the lengthy and detailed setup procedure can lead to unexpected results. As it turned out the XSP-1 revealed the little shortcut I had taken during setup.

With everything working correctly I fired up my Revox B-77 reel-to-reel and loaded a reference tape of Dark Side of the Moon. The true test of any turntable setup is how it compares to tape. A vinyl LP is a cost effective means of mass producing analogue tape recordings. If the turntable, tonearm, cartridge, and preamp combination is correctly matched, the playback from vinyl will be virtually indistinguishable from the tape. I was pleasantly surprised to discover that the Emotiva XSP-1 proved to be exceptionally good. It was dead quiet in operation -revealing tape hiss and other subtle details transferred to the vinyl from the original master tape. A-B comparisons with the Revox B-77 revealed just how good Emotiva’s phono stage RIAA equalization functioned. At times I had to listen for surface noise on the LP to differentiate the two sources.

I was also pleasantly surprised to discover that the Emotiva XSP-1 has a built-in crossover/dividing network for use with subwoofers. It functions from 50 Hz to 250 Hz. High and low pass are independently configurable. This allowed me to remove my active crossover from the system, making for less wires and clutter.

Another unusual feature found in the XSP-1 was the contour controls (tone controls). One of the reasons I continued to use the Holman for all these years was its exceptional contour and balance controls. While many audiophiles frown on the use of tone controls, I find them extremely useful when working with older poorly equalized analogue recordings. The Emotiva proved to be a much improved implementation of these controls with a virtually silent background.

The XSP-1 offers both balanced and unbalanced inputs and outputs. This afforded me a new found flexibility over the old Holman preamp by allowing me to use the balanced inputs on my Bryston 4B-ST amplifiers.

Digital input from the DAC took the listening experience to a whole new level. I couldn’t get over how quiet the background was – it was dead quiet. When listening to quiet passages in both classical and jazz music it created a sense of realism that was matched only by products from Mark Levinson and Bryston, both costing many times more than the $999 price of the XSP-1. Dynamics and detail from the output stage were second to none.

The XSP-1 has one function I would like to have tested, but didn’t have time. HT By-pass (Home Theater By-pass) is apparently intended to allow the XSP-1 to be integrated with something like the Emotiva UMC-200 Preamp/Porcessor to allow for full surround sound capabilities. When I have time this post will be updated to include more information about the HT By-pass.

I’m a creature of habit and seldom keep a piece of demo equipment for more than a week because it’s usually either inferior to what I’m already using, or it offers nothing new. After years of upgrades and repairs to the Holman, and refusal to switch to the better Mark Levinson and Bryston because of lack of functionality, the Emotiva XSP-1 has convinced me to make a permanent change to my system. It’s a true step up from the Holman in sound quality, and offers the functionality the others are missing. Emotiva has created a state of the art stereo preamplifier with XSP-1. It is without a doubt the best I have ever used or tested.