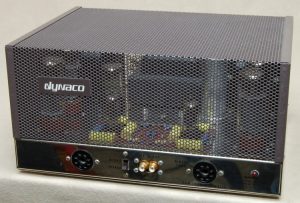 David Hafler and Ed Laurent founded the Dyna Company (later Dynaco) with the intention of not only producing transformers, but high-quality audio circuitry. The company was incorporated in October 1955, with business premises located at 617 N. 41st St in Philadelphia. Dynaco’s first product was the Mk. II 50-watt power amplifier. Available as a kit or preassembled unit, the Mk. II was sold for several years until its replacement in 1956 by the Mk. III amplifier, which produced 60 watts. Dynaco continued to build both mono and stereo amplifiers until 1977. The company’s final contribution to vacuum tube technology was the massive Mk. VI mono power amplifier of 1976, which produced 120 watts (continuous).

Dynaco is best remembered for its highly regarded vacuum tube stereo amplifier, the Stereo 70 (ST-70). Introduced in 1959, the ST-70 was available as a kit (Dynakit) intended for assembly by the purchaser or as a complete factory-wired unit (Dynaco). The ST-70 used four EL34 output tubes, one GZ34/5AR4 rectifier tube, two 7199 input (driver) tubes, two output transformers, one power transformer, and a pre-assembled printed circuit board (PCB) containing the driver circuit. It produced 35 watts per channel. The driver circuit had a single 7199 pentode/triode tube per channel, and used the driver tube to handle both voltage amplification and phase splitting. The output transformers are an ultralinear design, whereby part of the primary winding is fed back to the output tube’s screen grid. This design reduced distortion and improved audio quality.

A masterpiece of efficient circuit design, the ST-70 provided reliable, high-quality audio amplification at an affordable price. The popularity of the ST-70 contributed more than any other single product to continuing consumer interest in tube-based stereo amplifiers at a time of increasing market dominance by solid state audio products. Because of its excellent value for cost, Dynaco tube amplifiers were often referred to as “the poor man’s McIntosh.” More than 350,000 ST-70 amplifiers had been sold when production finally ceased, making the ST-70 the most popular tube power amplifier ever made.

In 1992, an updated version of the Stereo 70, the Stereo 70 II, was produced by Sound Valves for Panor Corporation. Even today, upgraded components, rebuilding kits, and complete tube amplifiers using the basic Stereo 70 design are still in production, and the ST-70 has inspired numerous other amplifier designs, such as Ars-Sonum’s Filarmonia SE.

Perhaps the most famous and enduring modification to the Dynaco ST-70 was created by Roy Mottram of Vacuum Tube Audio (VTA): the VTA70 circuit board. This upgrade to the original ST-70 was first introduced in 1988. According to Vacuum Tube Audio:

The driver circuit on the original amp with the two 7199 tubes was done to “save a tube”. In light of circuits available today, the driver circuit can easily be improved upon. The original driver board was made of an inexpensive phenolic material with open solder traces on the bottom of the board. This phenolic material was not very heat resistant and the board would many times turn black from heat under the 7199 tube sockets. The open solder traces sometimes lifted from the board. The carbon composition resistors found on the board would, after many years, stray from their original values. The VTA board is made of epoxy/fiberglass and has no open solder traces. It has plated through holes so that parts may be placed on either the top or bottom of the board. It has an “on board” power supply using Nichicon low ESR caps and an on board bias system that allows individual biasing of each output tube. The new board also uses 1% metal film resistors that will not stray from their original value over the years.

Three 12AU7 tubes are used. One half of the first tube is used for each channel as a voltage amplifier. One each of the other tubes is used per channel as a combined phase splitter/driver in a long-tailed pair configuration. 13 db total loop feedback is used.

Parts quality is top notch, with mil-spec tubes, metal film resistors, and WonderCaps. There is an individual bias pot for each output tube, as well as a signal balance pot for the phase splitters. The bias is set for 40 ma, about 20% less than stock to reduce heat and conserve tube life. Power supply capacitance for the B+ totals 470 uF. A future version will allow the option of tube or diode rectification, with isolated capacitance for each channel, and double the total capacitance; as well as HV regulation for the driver and LEDs indicating the need for bias adjustment if it drifts out of spec.

Open loop response of this design is incredible. It has flat frequency response from 7 Hz to 70 KHz, with good square waves from 7 Hz to 30 KHz. Open loop gain is 40.

Bob Latino has been involved with Dynaco almost since inception back in 1955. According to Latino:

I have been involved with Dynaco tube gear since the 1960’s. I can still remember in September of 1964 driving down to Lafayette Radio on Foster St. in Worcester, MA and purchasing a Dynaco ST-70 kit with all tubes and a tube cage for $89.95. I built that kit on the family’s kitchen table. It took about 3 days and my mother made me clean everything off the table every night so we could eat supper. I didn’t have a preamp at the time but when I plugged in an FM tuner into the amp’s inputs, the amp worked ! It would take another few weeks for me to save enough money for a Dynaco PAS-3 preamp kit. Got the preamp together OK and used both the amp and the preamp until 1976 when I sold both units to a student at WPI (Worcester Polytechnic Institute) to buy a Pioneer solid state receiver. Everyone was selling off their tube gear at that time because the growing mantra was “get rid of your tube gear now because solid state is going to take over” (yah… right …) I am still kicking myself in the butt on that one ! I mean who knew that tube gear would still be alive and kicking in 2016!

I bought a number of Dynaco ST-70’s off Ebay from 2004 – 2006. The first thing I did was to look for a suitable replacement driver board. I tried a few different driver boards and my ears told me that using the Tubes4hifi VTA driver board (designed by Roy Mottram) made a big difference in sound quality over what I could get out of these older original Dynaco ST-70’s.

Bob liked the VTA70 board so much that he later joined forces with Roy Mottram, and became Vacuum Tube Audio’s east coast representative. Then, according to Bob, “In late 2006 a customer lamented that he wished that you could still buy new Dynaco ST-70’s in KIT form. I thought about this for a while and decided that if someone did create a Dynaco ST-70 type kit, they should correct some of the things that Dynaco did as cost cutting measures which affect sound quality and/or amp reliability.” 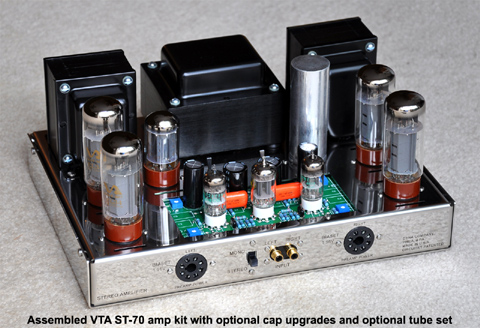 Improvements in the VTA ST-70

Thanks to the efforts of audio enthusiasts like Roy Mottram and Bob Latino, the Dynaco ST-70 will live on as a much improved version of its former self.

If you would like to learn more about Vacuum Tube Audio visit their website Tube4HiFi.com. You may also want to visit the Dynaco Tube Audio Forum.