If you’ve been following our Altec-Lansing Model 14 project that began with a summary of the loudspeaker, this final part will be of special interest to you. After spending 8 weeks testing the Model 14 with various crossover configurations and amplifiers, we’re ready to report our findings.

The Altec Model 14 suffers from a couple of weaknesses that have led to its lack of popularity among audiophiles. Firstly, Altec-Lansing revised the crossover at least four times but made no change to the model number. If this had been a JBL speaker, each crossover revision would have resulted in a change to the model number (Model 14A, Model 14B, Model 14C, etc.). Since most Model 14 owners have no idea which crossover is in their cabinet, they report a variety of different experiences while using the speaker.

At the time the Model 14 was developed, Constant Directivity horns like the Altec-Lansing Mantaray were new technology. They required special equalization to have a balanced frequency response. Altec’s crossover design focused on equalizing the Mantaray horn while virtually ignoring balancing its output level with that of the woofer.

The second weakness is the woofer itself. It’s not really a woofer in the conventional sense, but more of super mid-range that operates in the 70 Hz to 1.5 kHz range. While it can produce pounding bass, this requires a separate equalizer.

While the Model 14 may not be the perfect loudspeaker in its original state, it has a very alluring and pleasant sound that invites you to fall into the music. In a way it’s begging an engineer to come along and rescue it from audiophile oblivion, and that exactly what we’ve done. 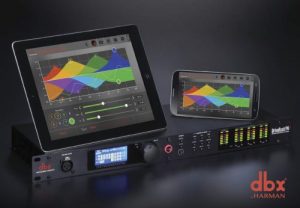 We began by ordering more Dayton Audio BPP-G Premium Binding Posts, a pair of Dayton Audio DBPP-BK Double Binding Post Plates, and a couple of 47uF capacitors from Parts Express to allow for bi-amplifying the speakers. The original crossovers were completely disconnected. The new capacitors were placed in-line with the wiring to the Mantaray horn to protect from potential DC offset from direct coupled amplifiers.

The Model 14’s were placed on stands so that the horns were just below ear level, and then tilted up by inserting a 2mm spacer.

It was decided that our usual Bryston 4B-ST amplifier was not a good candidate to connect directly to the horn’s compression driver. Someone pointed-out that it was akin to using a 9 lb sledgehammer to drive a thumbtack. A recently restored Dynaco ST-70 tube (valve) amplifier was brought into service for use with the horns, while a Bryston 4B-ST powered the woofer. (Hey! The woofer is more akin to a nail than a thumbtack!)

The next step was setting up the dbx DriveRack PA2 to act as a 2-way crossover, and to provide correct equalization for the Mantaray horn. We decided to go with Altec’s original crossover point of 1.5 kHz, and to use a Linkwitz-Riley 12 dB slope. Equalization for the Constant Directivity Mantaray horn was automatically performed with the assistance of the dbx RTA-M microphone, as was the balance between the horn and woofer. (This assumes you already have the balance within +/- 3 dB).

We tested this and several other crossover configurations over the next few days. It was then decided to replace the Dynaco ST-70 with a Parasound HCA-750A amplifier, and we ran the same crossover tests with it.

The Parasound produced the most accurate results, but the envelope delay from the Dynaco’s tubes provided the most pleasant overall sound quality. There was also a lengthy discussion about the impact of damping factor on the Altec compression driver. Some felt that the high-current/hi-damping Parasound amplifier caused the transients to be too aggressive for an average size room, although no consensus was reached on the matter.

After more extensive testing we decided to use the dbx DriveRack PA2 in a three-way configuration with a B&W ASW-4000 subwoofer. We set the crossover points at 80 Hz and 1.5 kHz. The filters were changed from Linkwitz-Reily to 2nd order Butterworth (12 dB slope). This greatly improved the overall sound of the system.

Next, we switched the filters to 3rd order (18 dB slope) Butterworth. This further refined the subwoofer, but some felt it made the horn too bright and detailed. So we compromised with by using a 3rd order for the sub and the 2nd order for the horn. Some felt this was a bit too warm, while others found it to be neutral. We recommend you try both and settle on the sound you like best.

Listening to the Ultimate 14

Our Model 14’s immediately shamed a pair of stock JBL 4425’s, and then proceeded to school our pair of Altec-Lansing Model 19’s on how well refined horns ought to behave. The Mantaray horn acted more like a modern Linear Spatial design -producing a wide sweet spot over 6 feet in width. Tonality changed very little as we moved around the room. Whereas the woofer had failed to impress anyone in the past, it now produced the type of low frequency response we would expect from a 12″ driver. Everyone was extremely impressed by the significant improvement that had been achieved.

When we blended-in a pair of JBL studio subs crossed over at 55 Hz, the 14’s presented us with an astonishing sense of realism. The transients of the Mantaray horns combined with the low frequency dynamics of the studio subs was truly ‘Audiophile Nirvana’. It’s the kind of loudspeaker system that disappears as the music unfolds in front of the listener.

We also tested our ‘Ultimate 14’s’ for use in Home Theater. Due to their Linear Spatial-like sound-field, they proved to be among the best Home Theater loudspeakers we had ever experienced. In much the same way that they tended to draw the listener into music, they made Dolby Digital and DTS almost life-like.

The Altec-Lansing Model 14 has the potential to be a true undiscovered jewel. A pair, along with a dbx DriveRack PA2, can be purchased for less than $1,000. To match it’s capabilities you will need to pay a minimum of $3,500 for another pair of speakers. Yes. It’s that good.