“Compostela”, literally “a field of stars” is the result of over two years of design and engineering. Everything from its stacked box design to the drivers chosen reaches back to the golden age of Altec Lansing.

The Compostela loudspeaker system is a D’Appolito hybrid design also known as an MTM. You can learn more about MTM designs here. 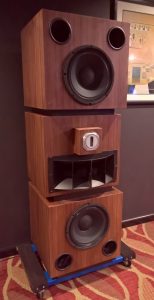 What would become the Compostela began a few years ago during a phone call between Bill Hanuschak of Great Plains Audio and Steve Freeman of Vintage Speaker Revival. A subsequent call a few days later included Jeff Peace of the North Georgia Audio Society. The idea was to develop a new loudspeaker system using vintage Altec Lansing horns and drivers. Jeff felt that any new design would require super tweeters, but Bill informed him that Altec never made any decent ones. So the search began for a super tweeter to use with the new design. Several ideas were passed around and eventually it was decided that two new systems would be designed: Compostela and Lansing 300. The Compostela would be a D’Appolito hybrid and the Lansing 300 a traditional 3-way with a 15″ woofer.

When design began, Richard Christianson and Greg Monfort were brought on as technical advisors to the project. The look of the new cabinet needed to be pure Altec Lansing, so the cabinets were modeled after the stacked box design of the Model 19 and 14. There was much discussion about whether to use 416 or 515 woofers, but in the end the 414 was chosen because it worked better with the narrow profile of the cabinet. The Beyma CP21/F slot tweeter was chosen after evaluating a dozen or so super tweeters because it blended almost magically with the 811B horn.

The first group to hear the Compostela chose to begin with “Larks’ Tongue in Aspic” from the 40th anniversary remaster of the King Crimson CD Larks Tongues in Aspic. After listening to the track Chris said “I’ve heard that track at least a hundred time, but I hadn’t really heard until today. There are obscure details that I’ve missed until now.” This was followed by Chopin Etudes by Maurizio Pollini. Everyone in the room was spellbound by the realistic presentation of the piano. The result of this recording would impact the rest of the listening session, which was one classical piece following another. At the end of the listening session one member remarked: “That may be the best classical music speaker I’ve ever heard.”

The second listening session began with “Cuentame Que Te Paso” from Putumays Presents Afro-Latin Party. The majority of this session was spent listening to Latin music with the occasional modern country music track. Remarks centered around the realism of the percussion instruments, such as “It’s like the band is right there in front of me.” It should also be noted that this group listened at higher than normal listening levels. They really got into the dynamics and transients the Compostelas easily reproduced.

The third session was a small group that included Steve Freeman and Greg Monfort. Greg decided right away that he didn’t like the toe-in angle, the speakers were moved until he felt the angle was just right. This was a lengthy listening session that ended with several re-plays of Christian McBride’s “Night Train from his CD Gettin’ to It. In the end there was notable disagreement between Greg and Steve. Greg felt that the Compostela lacked the dynamics of the big horn Voice of the Theatre systems. Steve, on the other hand, felt they were an overall improvement because they offered the same “big sound” but were more controlled and detailed.

The fourth, and final group, was large, and the session lasted about five hours. Before the listening tests had even begun Scott said that he doubted it could be a very good system because the 811B horn is too harsh. Others brought up the possibility of driver alignment problems, and questioned the choice of the 414 woofers. This was clearly the toughest crowd to please.

After listening to a few tracks it was determined to once again change the toe-in. This was followed by more listening which resulted in changes to the crossover points and slopes, which are easily changed in the dbx DriveRack PA2 digital crossover.

Lawrence commented that the overall tonality was shockingly similar to his Sierra Brooks horn system. Scott was amazed at how well behaved the 811B horns were in the system. He commented “I have to say they exceeded my expectations, and that’s saying something!” Other noteworthy comments included:

“If the design goal was to build an improved vintage Altec Lansing speaker, it was met and exceeded.”

“The Compostela reminds me of systems designed by Greg Timbers (of JBL).”