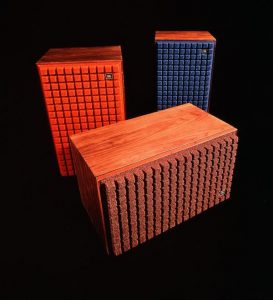 It appears that this is the end for JBL as we have known it. – Greg Timbers

James B. Lansing founded JBL one year after leaving Altec Lansing as their Vice President of Engineering in 1945. The company was first called Lansing Sound, Inc., from 1 October 1946, and later changed its name to James B. Lansing Sound. James Lansing was noted as an innovative engineer, but a poor businessman. For the next three years Lansing struggled to pay invoices and ship product. As a result of deteriorating business conditions and personal issues, he committed suicide on September 4, 1949. The company then passed into the hands of Bill Thomas, JBL’s then vice-president. Lansing had taken out a $10,000 life insurance policy, naming the company as the beneficiary, a decision that allowed Thomas to continue the company after Lansing’s death. Soon after, Thomas purchased Mrs. Lansing’s one-third interest in the company and became the sole owner of the company. Thomas is credited with revitalizing the company and spearheading a period of strong growth for the two decades following the founding of JBL. In 1955 the brand name JBL was introduced to resolve ongoing disputes with Altec Lansing Corporation. The company name “James B. Lansing Sound, Incorporated” was retained, but the logo name was changed to JBL with its distinctive exclamation point logo. In 1969, Bill Thomas sold JBL to the Jervis Corporation (later renamed Harman International) headed by Dr. Sidney Harman.

JBL is best known for the now legendary L100 Century loudspeaker that was first introduced in 1970, and went on to sell over one million units. It’s an important part of the history of hi-fi, but only a small part of JBL.

JBL designed and built loudspeakers for cinema, recording studio, arena, automobile, and home use.   As a manufacturer of loudspeakers it was second to none -bypassing Altec-Lansing in the 1980s.

JBL drivers and transducers are renowned world-wide, not only for their excellent sound, but extreme reliability. This is, in large part, due to their incredible staff of acoustic and electrical engineers. Dr. Floyd Toole, Greg Timbers, Don Keele, and Jerry Moro are but a few of the people behind what everyone knows as JBL. This is because, at its heart and soul, JBL was an audio engineering company. They designed and built everything in-house. Their world-class acoustic research facility allowed them to delve deeper than anyone had into the nature of sound, and its accurate reproduction.

In February of 2010 JBL began shutting down its Northridge, California facilities and moving production to Mexico and China. Many of the craftsman that had built the drivers and cabinets for over a quarter of a century found themselves unemployed. As of June 2010 JBL products were no longer made in the United States. Not long after this, replacement parts for virtually all of JBL’s most iconic loudspeakers were no longer available. Prices for original tweeters and woofers skyrocketed on eBay and other sites. Demand is now so high for some of these speakers that people are gutting old JBL cabinets and selling the parts.

On September 30, 2015, Greg Timbers, the engineer responsible for many of JBL’s most popular loudspeakers over the past 40 years, was let go. He posted the following to the Lansing Heritage forums: “I was unceremoniously separated from employment by Harman following a 90 second explanation. My position was eliminated!”

Then, on March 17, 2016, Timbers again posted to the Lansing Heritage forums:

JBL (Harman Luxury) laid off 3 more employees yesterday. Their seniority totaled over 70 years. The big hit was Jerry Moro. Jerry’s work is legendary and his transducers have been featured in most of my designs for years. He also has done transducers for Revel, JBL automotive product, [and] some really fine subs used by Synthesis and JBL Pro just to name a few of his many, many accomplishments over the years. His latest products, not yet to market, are a pair of stunning in-wall systems using a compression driver and horn. They still fit into a standard 4″ wall. I worked with him on these products a bit before my demise. They are absolutely outstanding.

So this brings an end to any world class engineers at JBL. Jerry and I were the last two. There are only 3 guys left, and although they are competent, they are no where near the knowledge, success or capability of what they just dumped. The senior Model maker left last week to go elsewhere, which means that Consumer no longer has any model making capabilities, either.

It appears that this is the end for JBL as we have known it. The Lab equipment is in total disarray with much of it not working properly. If it weren’t for [JBL] Professional’s need for, and use of the lab, I doubt that it would function at all. There will be no more internal transducer development, no world class engineers, no more internal model making capabilities and no more real JBL product. It is just going to be me-too product copied from somebody else and designed and manufactured in China or equivalent.

For audiophiles and studio guys the changes at JBL are both alarming and disconcerting. Parts for some of the large and expensive monitors are no longer available. Some of these loudspeaker systems cost tens of thousands of dollars. They were a major investment for the studios that use them.  They relied on JBL’s long history of parts availability to keep them functioning. Now, these large investments can be turned into worthless wooden crates due to the failure of a single driver.

As a country, the United States, continues to lose its manufacturing capabilities, and devalues the people who made our companies the greatest in the world. While the Japanese design and build excellent quality audio products, they covet American made JBL loudspeaker systems. This alone should stand as a testament to the value and quality of the loudspeakers produced by JBL over the years. As a culture the Japanese prize what they deem to be the pinnacle of quality. JBL speakers are still among the most highly prized items in Japan.

Goodbye JBL as we have known and loved you. It’s a sad day for music lovers around the globe.

Great Plains Audio, as many of you know, rescued the vintage Altec Lansing products, and now it’s trying to do the same with vintage JBL.

Audiophile Nirvana is a publication of the North Georgia Audio Society